Repsol scores highest of the 103 participating companies (78 Dutch and 25 EU), regarding European tax transparency. According to the most recent publication of the EU Tax Transparency Benchmark of the Dutch Association of Investors for Sustainable Development (VBDO). Repsol scored 38 out of a maximum of 40 points. With a score of 36 points, NN Group is the winner amongst the Dutch companies for the fourth time in a row.

Angélique Laskewitz, executive director of VBDO: ‘We have been pleading for tax transparency for over 11 years. Luckily we are no longer alone in this, fiscal governance codes arise throughout Europe. The EU member states will be implementing the EU-directive Public Country-by-Country Reporting and the 207 standard of the Global Reporting Initiative is increasingly becoming more mainstream. Our commitment to this subject certainly has delivered a positive contribution.’

Tax transparency is increasingly becoming more mainstream. In 2015, only 1 in 9 listed companies in The Netherlands reported their fiscal policy. That has now grown to a percentage of 84%, of which 25 are AEX-listed companies.

Since 2016, Country-by-Country reporting (CbC) is mandatory for Dutch companies with a revenue of over €750 million, to counteract tax evasion. In CbC-reports the profits earned per tax jurisdiction and the taxes paid are reported.

The VBDO Benchmark reveals, however, that only 14% of the Dutch companies (of which 7 are AEX listed) and less than a quarter of the researched European companies have a fully transparent CbC report, in line with GRI 207-4.

Laskewitz: ‘I am surprised about the fact that a number of European companies punch below their weight regarding tax transparency. I would have expected more from well-known companies. In that light, Dutch companies, especially AEX-listed ones, are doing a relatively good job.’

Apart from the difference per region, there are several noteworthy differences per sector. The European energy companies score on average the highest (59%), followed by the financial sector (55%), with the pharmaceutical companies lagging behind (39%). 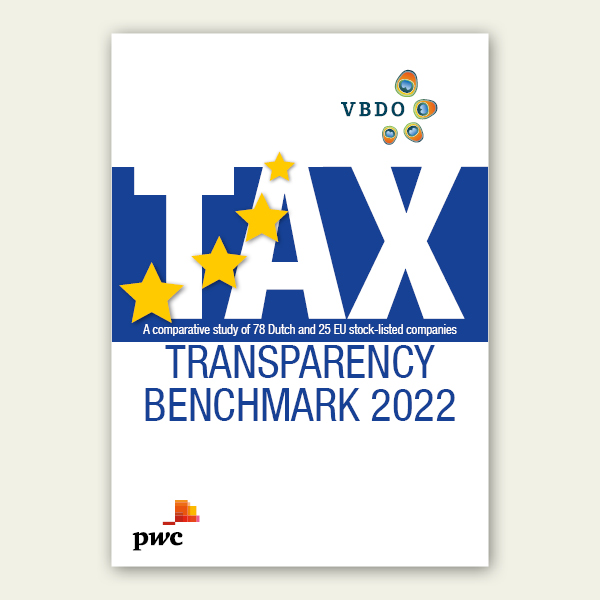