Climate change has been on the agenda of Dutch pension funds since the Paris Climate Agreement. To what extent does the climate approach of Dutch institutional investors actually contribute to solving the climate problem? Hardly, according to new research by the Association of Investors for Sustainable Development (VBDO). On average, investors score a 2.9 when it comes to their climate strategy.

The report Dutch Institutional Investors and Climate Change – Becoming part of the solution is part of the (two) annual pension fund and insurer benchmarks of VBDO. In this report, policy, implementation, management and transparency of the largest 50 pension funds and 30 insurers are examined, totaling € 1.48 trillion in assets under management.

VBDO does emphasize that this climate ranking only gives a general picture of the extent to which investors use these different approaches. Although extensive research has been carried out to compile the full report, a concise number of questions has been used for the specific ranking component.

VBDO distinguishes between different approaches that investors can take with regard to climate change as a common thread in the research: On the one hand, they focus on limiting investments that contribute to climate change, such as fossil fuels and polluting industries. On the other hand, adapting to the physical effects of climate change, such as extreme weather, drought and rising sea levels, is becoming increasingly important. The study makes a further distinction between the effects of climate change on the investment portfolios and the impact of the investments on the climate resilience of the real world.

Almost all investors who integrate climate change in their investment policy focus on reducing the CO2 emissions of their portfolio. Only one fifth of investors take into account the physical risks associated with climate change. VBDO sees that adaptation of the portfolio by investors only takes place in terms of protecting assets or reducing risks for the investment portfolio and not of the world around it.

Although it is the first time that the climate approach has been investigated in this way by VBDO, it can already be concluded that there is improvement in the way in which pension funds deal with climate change. Whereas in 2017 only 42% of the pension funds had included climate change in its responsible investment policy, in 2019 that had risen to 88%. The insurers have not previously been monitored by the VBDO, but 45% of that group has currently formulated a policy on climate change.

Jacqueline Duiker, senior manager of sustainability & responsible investment at the VBDO: “The research shows that institutional investors do not play a role in contributing to the climate resilience of the environment. Investors generally focus primarily on the physical risks in their investment portfolios, which in the long term results in more and more areas losing their investment value. Investors must therefore also pay attention to the impact of their investments on the climate resilience of the real world in order to be able to invest in anything at all in the future”. 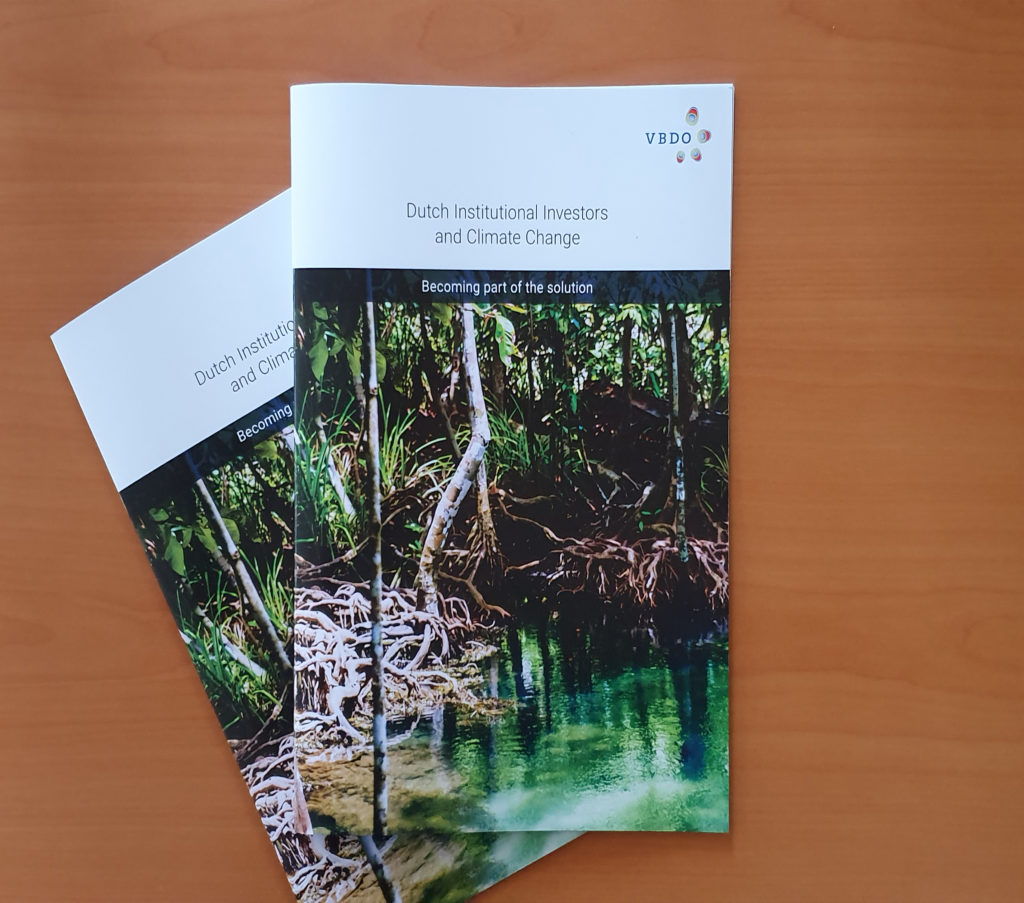