Biodiversity finally on the agenda

After companies ignored biodiversity for years, it is now seen by the vast majority as a material theme. This is the conclusion of research done by the Association of Investors for Sustainable Development (VBDO) among 38 Dutch listed companies. Many organizations depend on biodiversity for their activities and have an impact on it as well. For example, worldwide bee mortality is associated with the overuse of pesticides by the agricultural sector. This mortality has consequences for the same sector, because bees are needed for pollination of most vegetable crops and fruit trees.

‘In the periods 2003-2005 and 2010-2013 we already looked at the extent to which biodiversity was on the agenda of the business community,’ says Angélique Laskewitz, director of VBDO. ‘Actually, we see that Dutch companies hardly paid any attention to it at the time, although many were, and still are, dependent on it in one or more respects. Preserving biodiversity is therefore extremely important, and decrease poses a real risk to them.’

Research by VBDO shows that the financial sector, in particular, is paying increasing attention to biodiversity, while the technology sector is still lagging behind. Laskewitz: ‘Financial institutions such as banks and insurance companies can make a significant contribution because as shareholders they can exert pressure on companies in which they invest. We also attend annual shareholders’ meetings, where we ask board members to engage in improving their strategy and policy. This year we got a surprising amount of commitments.”

Insurer a.s.r. is one of those institutions with a comprehensive biodiversity strategy. Jack Julicher, CEO a.s.r. asset management: ‘As a.s.r. we are pleased with the recognition we are receiving for our commitment to biodiversity. The qualification ‘leading’ is a confirmation that we are on the right track with our current efforts and strategy. In addition to climate change, we see the conservation and restoration of biodiversity as an important challenge and we recognize that the financial sector plays a crucial role in bringing about change. This kind of research contributes to keeping it on the agenda and stimulating attention for biodiversity.’

Although many companies recognize the importance of biodiversity for their own activities, the VBDO report finds that they often fail to describe a sound strategy. Only one in four companies is currently setting comprehensive, concrete goals. ‘We realize it’s a broad topic,’ Laskewitz says. ‘Yet we expect companies to report on objectives such as regenerative agriculture, reduction of deforestation or water use. After all, it’s not just about their own activities and continued right to exist, but from all of us.’

VBDO annually conducts research among around 40 Dutch, listed companies on three different sustainable themes. The results of this research and the outcome of the questions they ask at shareholders’ meetings are bundled in the AGM engagement report 2022. In addition to biodiversity, the report also mentions the results of the themes working conditions in the supply chain and diversity. 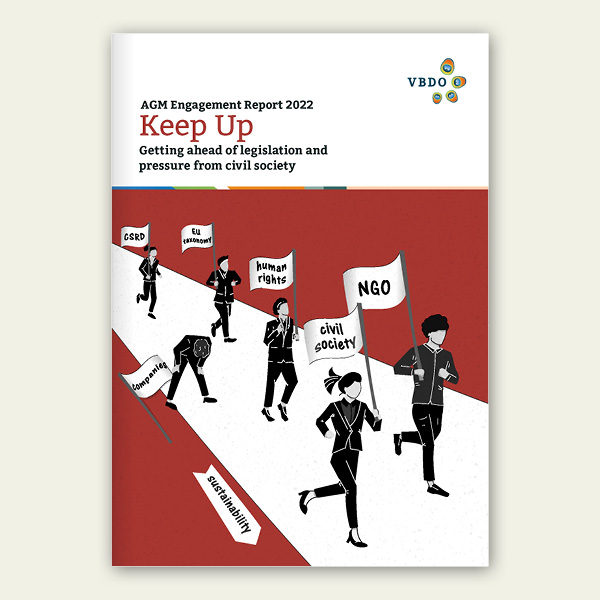